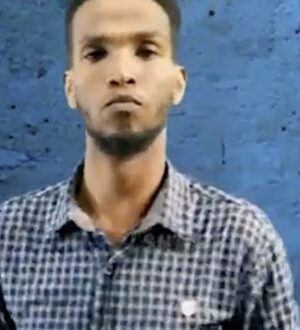 A Mogadishu based musician who took part in demonstrations against Al-Shabaab bombings and whose band received funding from the city administration has been a member of the outlawed terror group for close to ten years.
Ads By Google The intelligence agency, NISA said Tuesday it had arrested the singer identified as Abshir Garane Ahmed.

In a video clip posted by the spy agency on social media, Ahmed confesses to membership of the group since 2013. “I joined the Al-Shabaab in 2013 and my responsibility was to manage finances,” the artist whose songs have even been played in state television said.

A music band in which Ahmed had been a member is reported to have received funding from Banaadir Regional Administration in the past as part of its outreach and anti-radicalisation programme.

Separately, in video clips online, Ahmed is seen participating in demonstrations against Al-Shabaab following the truck bombing in October 2017 which killed over 600 people.

The group did not claim responsibility for the attack but the government directed blame on the group.
Ahmed is seen wearing a t-shirt which condemns the militant group, which apparently, he had been a member.

The arrest of Ahmed comes barely two weeks after a former college teacher was sentenced to death in Mogadishu for killing senior military officers.

Mohamed Haji Ahmed aka Ilka-ase, the son of a senior police officer was found guilty of killing among others three army generals, a police corporal and a deputy attorney general.