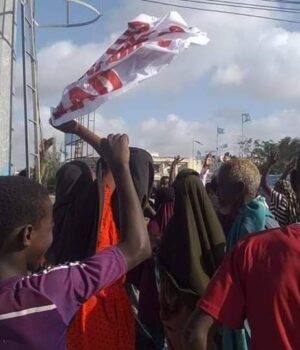 Hundreds of residents took to the streets in Mogadishu to protest against the planned term extension by the President Farmaajo’s government, witnesses said.

Witnesses said that heavily armed police force deployed at Daljir-ka Dahsoon area, where the protests were taking place, responded with gunfire to the gunfire at a peaceful demonstration in the Bondhere district against the term extension of FGS and NEIC decision to postpone elections.  The poilce also confiscated the equipment and threatened journalists from several media houses in Mogadishu.

There were no casualties reported.

However, local media reports that the police confiscated journalists’ equipment trying to cover the peaceful protests in the Somali capital. Several protesters were reportedly arrested.

“The police forcefully confiscated the equipment from Universal TV’s camera crews and threatened to kill” Universal TV reported on its Facebook on Sunday morning.

The protests follow after expected meeting between the leaders of the FGS and FMS that was scheduled for Sunday  has been postponed according to media reports.. The two sides were supposed to discuss about the modalities and the date of the upcoming elections in Somalia.

The National Independent and Electoral commission NIEC and Somali government proposed term extension for the current government headed by President Farmaajo, which many say could lead to a catastrophic results.

The protest also comes a day after a suicide bomber targeted Tax collection points  at Mogadishu Port and the town of Baidoa killing at least a dozen people and injuring many more.

Similar protests are taking place in neighboring Ethiopia, where the protests claimed more than 100 people, following Ethiopian government’s plan to extend its term.