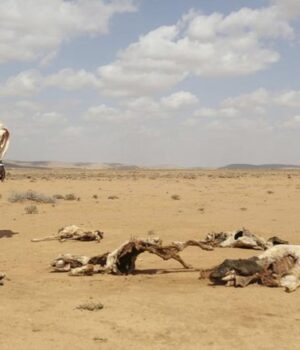 • An inter-agency rapid needs assessment confirms worsening drought across the country. Other reports indicate the October-December rains have largely failed.

• More than 3.2 million people in 66 districts are affected by a historic multi-season drought, of whom at least 169,000 have been displaced in search of food, water and pasture.

Drought has worsened in Somalia. More than 3.2 million people in 66 out of the country’s 74 districts are experiencing the cumulative impacts of three consecutive below average rainy seasons, of whom 169,000 people have abandoned their homes in search of water, food and pasture. According to FEWSNET/FSNAU, the 2021 deyr (October-December) rains have largely failed across most of Somalia. This has led to the worst seasonal harvests on record, excess livestock losses and exceptionally high cereal prices. The situation is projected to intensify as Somalia faces the risk of a fourth consecutive failed rainy season in early 2022.

Preliminary findings from a country-wide rapid needs assessment completed on 6 December show extreme impacts on already vulnerable populations, affected by decades of complex emergencies and natural disasters. Partners collected data across five states – Galmudug, Hirshabelle, Jubaland, Puntland, and South West State – and found that access to water has diminished as the boreholes and shallow wells in most locations have dried up. Water prices have spiked, with eastern and central parts of Galmudug State, Jubaland and South West states reporting the highest water prices. Water wells were found to be distant, to about 100 km in some places.

The assessment found that many families have lost their means of livelihoods. At the same time, prices of basic commodities including food have significantly risen above the reach of most families. As a coping mechanism, families have reduced the frequency and quantity of meals, including for children. Over 80 per cent of interviewees had exhausted all of their food stocks.

Pastoralists interviewed during the assessment reported that the scanty pasture resources are getting depleted. Most areas reported a shortage of livestock feed, with current fodder stock only able to sustain livestock for less than one month. Resource-based conflicts over pasture and control of water sources were reported in Galmudug State. In addition, pastoral migration in search of food, water and pasture is on the rise, including across the border into Ethiopia and Kenya. To address increased displacement, new IDP sites have been established, for instance in Wajid, but living conditions are execrable due to insufficient services. Livestock deaths were reported, and the market value for livestock has reduced as many animals are sick or dying. In nearly 90 per cent of the locations, crop production has reduced by more than 80 per cent due to lack of rain compared to normal times.

Major health concerns and disease outbreaks were identified during the assessment including malaria, acute watery diarrhoea (AWD)/cholera, typhoid fever, pregnancy complications and respiratory infections. An increase is reported in acute malnutrition. COVID-19 infections are reportedly on the increase in Galgadud region, due to severe water shortages and lack of access to adequate hygiene and sanitation facilities, the majority being in IDP camps. The assessment recommended urgent provision of urgent lifesaving assistance, including water trucking for pastoralists and vulnerable communities; distribution of food aid, cash and voucher assistance, distribution of hygiene and sanitation kits to the drought effected communities and access to nutrition and health services in the hotspot locations. Top priorities in the areas visited are food, water, shelter, health and access to livelihoods.

UN Office for the Coordination of Humanitarian Affairs