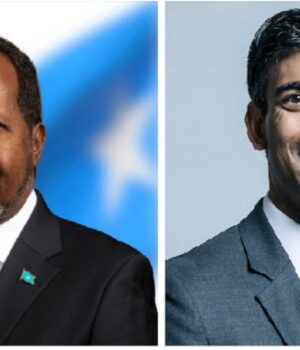 The President of Somalia congratulated Rishi Sunak for becoming the next Prime Minister of the United Kingdom [UK].

Hassan Sheikh Mohamud joined other leaders who have congratulated Rishi Sunak who is set to take over as the first Indian-descent Prime Minister of Great Britain.

“”Congratulations to Rishi on becoming the leader of the Conservative Party & the next PM of the UK. Somalia & the UK enjoy strong bilateral ties built on cooperation & mutual respect. We look forward to further strengthening our partnership in all areas of mutual interest,” the president has tweeted.

The UK is one of its key partners in Somalia in the security, humanitarian, and state-building process