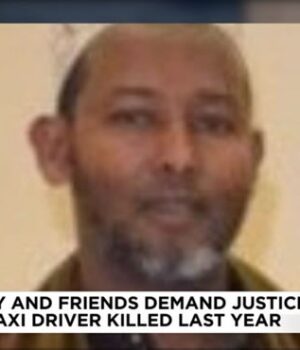 WINDCREST, Texas – Aadam Ugaas Xirsi, who was shot while sitting in his cab in the parking lot of a thrift store off I-35 and Eisenhauer Road, was well known in the San Antonio Muslim community, according to his friend, Tammy.

For her protection, Tammy chose not to disclose her last name.

“He would sacrifice his time for the homeless, for the women, for the disabled, for everybody. He sacrificed a lot for his family. He was giving to the community. He was very pious and humble,” she said. Ads By Google Xirsi came to the U.S. from Somalia to seek the American dream about 15 years ago. He had three children, ages 7 to 13 years old, and a wife, according to his friend.

Xirsi’s family in Somalia is trying to get some answers and justice, and his youngest son feels helpless.

“He said to me, ‘Auntie, if I could come right now, I would turn over every stone to find the killer of my father.’ To hear a 7-year-old say that is not normal, and it’s painful,” Tammy said.

Tammy is trying to help the family get answers from police.

Tammy said the local Muslim community has been left wondering if Xirsi’s death was a hate crime, but without an arrest, they don’t know.

Friends at the Yellow Cab office, outside of Windcrest, where Xirsi worked say he was very well liked. They said they hope someone has information or that the killer finds remorse.