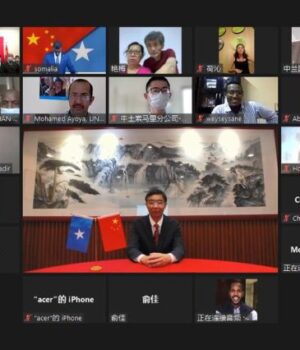 -Chinese Embassy held online reception to mark the 72nd National Day of China, and the centenary of the founding of the Communist Party of China here in Mogadishu this week.

The Ambassador recounted the historic friendship between Somalia and China, saying he would continue to work with the Somalis to promote peace and reconstruction and further friendship and cooperation between our two countries.

“Somalia was the first East African country that had established diplomatic ties with China. 50 years ago, Somalia made important contribution to China’s restoration of the lawful seat in the United Nations. Chairman Mao Zedong said, “It was African brothers who had carried China back to the United Nations.” Somalia is a good brother of China”, He said.

Mr. Fei said Chinese side will continue to strongly support the Somali side in its efforts to meet its legitimate needs. China’s vote in the United Nations always belongs to Somalia and the vast number of developing countries.

“China is preparing to donate another batch of vaccines to Somalia to better protect the life and health of Somalis. This year, more than 30 Somali students are granted Chinese Government Scholarships, totalling 500 during the past 8 years. When Somalia was confronted with the Covid-19 pandemic, China lost no time in donating and delivering 200 thousand vaccines this April”, the Ambassador stated.